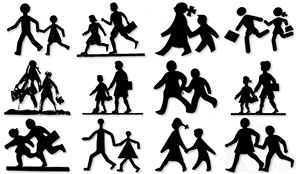 What are our objectives when we are looking at the history of mankind? Nature is a space for us beyond our control. Nature threatens us in many ways. So we are trying to transform ourselves from victims into commanders, and our environment into a world, that meets our needs.

So people have started building cities. They became the focal points for a well structured world. Urban space has two poles between which it develops its structure. First, there is the city center, a place that enables the residents to experience themselves as a community. Second, there is the border to the surrounding countryside. To mark the Transition, residents use unmistakable signals to make clear, what and who belongs to the town and in opposition, who has to be seen as an ‚enemy’ and that for kept out.

For a long time in history, walls and town-gates have been used to fulfill that purpose. They worked as a filter, that separates friends from enemies. What helps cities to survive in their self-created isolation? They had to become intersections of transportation routes. Prosperous trade, and a generally dismissive attitude is hardly to combine. The city walls therefore had tofall, also to allow a unrestrained expansion at some point.

New sign systems had to be developed to keep control and to avoid chaotic situations in the cities. Those who can afford it, are still dreaming about an exclusive, secluded and seemingly safe living area.

And so the question arises: Is it true, that the visual environment belongs to all of us? Who is allowed to occupy the public space with his signs and signals? What are the purposes and objectives we are pursuing, when we share common visible signs? When I am talking about the war of signs - where is the connection between signs and war? What else could the term ‚war’ mean than a military conflict? War is the focused and deliberate attempt to occupy resources, to gain power over others and to enforce personal interests. Killing people, normaly doesn't generate any profit. People often have to die because someone did not find any way to integrate them into a social system that promises to be compatible with their own interests.

Military aggression does spread fear and terror among the survivors. But traditional wars have not only the disadvantage that they are destroying what might be useful and valuable, but that their effect soon fades out, as the presence of terror falls into oblivion. From the ancient Romans we can learn, how military actions can somehow be replaced by an integration process, and that these forms of cooperation are as well able to enrich the live of everyone. In order to try influencing other people, without the use of brutality and physical violence, probably with lowerlosses and longer lasting effects, the bloodshed has tobe replaced by other forms of forceful communication. This works, as we all know, in two directions. Eitherwe flee in fear, or we fall in love. ...

The War of Signs, What do Signs in urban Areas tell us? 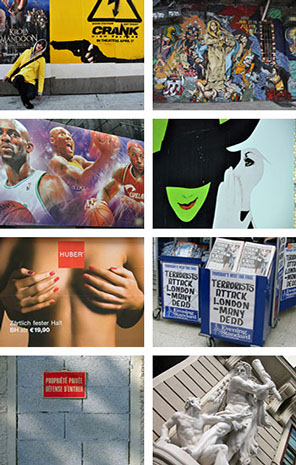